“A book like a pocket lamp that contests darkness: the darkness fabricated by those who have promoted a global blindness concerning what has happened in Palestine and Israel during the last sixty years. The battery of this remarkable lamp is true observation, and with it you discover exemplary courage in the most unexpected places. Pocket it!”    John Berger, author.

Our Way to Fight: peace work under siege in Israel-Palestine.

“What we are doing is more dangerous than to shoot a gun and then run away. You tie yourself to an olive tree, and you wait for the army to come.”    Mohammed Khatib, Palestinian activist.

“Sometimes you have to run very fast to remain in the same place. But when you’re active you build something, and if you don’t stop in the middle and leave in despair, it will bring results.”   Michal Shwartz, Jewish Israeli activist.

In Israel-Palestine, grim facts keep piling up on the ground. The people in charge talk and talk, but offer nothing new, only more lies, more ignorance, more hatred, more violence, more war crimes.

Our Way to Fight offers a fresh look at inspiring grassroots action, and tenuous paths to a livable future.

Author Michael Riordon documents creative resistance on both sides of the separation/apartheid wall. In thousand year-old olive groves, besieged villages, refugee camps, checkpoints and barracks, here are the lives of non-violent activists: crises that stirred them to act, the work they do, the dangers they face, and the small victories that sustain them. 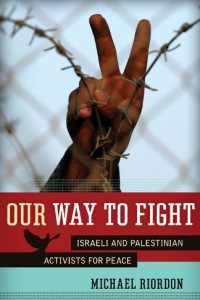 “Riordon’s respect for grassroots action and for the people who commit to it ensures that the depth of their voiced experience resonates on the page. In the current era of ‘drive-through’ media and sound-bite analysis, his book is a reminder that any ‘way to fight’ is best articulated by those who do.”   Andrea Meeson, City Press, Johannesburg, South Africa, April 2011.

“Our Way to Fight explores the stories of men and women who create glimmers of light and hope in the dark despair surrounding the Israeli-Palestinian conflict. A close look at activists who dedicate their lives to the struggle for social justice, Michael Riordon’s portraits reveal what it means to be a courageous person, a seeker of truth. This is a vital intervention for all who care about peace and justice.”   Neve Gordon, author of Israel’s Occupation

“Riordon presents lyrical portraits of nonviolent peace activists from both sides of the Israeli-Palestinian divide. From Israeli draft refusal to Palestinian opposition to Israel’s security wall, the efforts to circumvent the occupation and bridge the gaps between the peoples are many and varied, though activists are often forced to retreat in the face of forces in both societies that see cooperation as capitulation. Critically, Riordon includes many representatives of Israel’s own Palestinian community – the 20% of Israel’s population who are Palestinian but have Israeli citizenship, and are only rarely considered in any treatment of the conflict. Even while maintaining a sober assessment of the difficult road activists face, simply by demonstrating that Israelis and Palestinians can and do work in common cause, Riordon offers an important corrective to the standard tale of an intractable conflict.”    Publisher’s Weekly, US, March 2011

Available in print and e-book.

Inside Our Way to Fight: read excerpts, hear audio