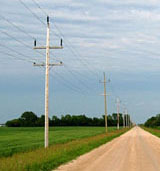 The bus drops me at a convenience store.  The town has one street about a mile wide, two churches and two grain elevators.  A steady stream of pick-ups and big old cars turn in diagonal to the curb.  Each driver checks me out as they go into the store.  I squirm.  Where the hell is ‘Raymond’?  He suggested we meet here in this anonymous town.

A canopy of dark clouds fills the 360 degree sky, torn by white lightning at the horizon.  Dear God, could this be the wrong town?  But then here he is, in a fire-red Chevy Blazer.  We barrel up a dusty side road, and I breathe again.  He parks between the road and the ditch, among fields of young grain that carry on in all directions to the far horizon.  It’s early June on the prairies.

“When I was a little kid,” he says in a mellow baritone, “I guess I did a bit of hero worship on the parish priest.  I liked him, and I wanted to be like him.  Looking back, I recall that he was incredibly handsome.”  Here were the twin pulses that would drive Raymond’s life.  He’s forty-two, a Roman Catholic priest, a chaplain on an armed forces base in northeast Alberta, and gay.

In his teens he had a girlfriend.  “But there were always these furtive glances at men, in changing rooms and places like that.”  He had his first sex with a man at nineteen, and at twenty his first relationship, lasting five years.  The other man wanted to settle down, but Raymond didn’t.  Fresh out of university he entered the seminary in Toronto.  After two years he was clinically depressed, and went to work for a computer company.  In his second relationship he wanted to settle down, but the other man didn’t.  By 1982 the impulse to priesthood had returned, so he went in for post-graduate theology in Ottawa.

“I was determined not to fall in love again, but in my second year I did.  He rebuffed me, and I pulled back, way back.  I was really angry and bitter about it.”  In 1986 he was ordained a Roman Catholic priest, and too vows of celibacy.  “I meant to keep them, I really did.”

Three years later Father Raymond got involved with a man.  “It didn’t develop into anything, but it certainly did reawaken all the feelings that I’d repressed.”  By now he’d joined the military, as a chaplain.

On his days off he’d go into the city, to meet other gay people. Sometimes in the bars he’d recognize priests.  He chuckles. “Some of them when they saw me, they’d be out of there like a bat out of hell!”

Now he’s in a relationship again, with Henry in Edmonton.  “The Pope may not like it, but everyone needs someone to love, it’s only human.”

Raymond lives off the base, in town.  “A rectory is a fishbowl, if you fart everyone knows about it in twenty minutes.  In town there’s a little less scrutiny.”  This is the bible belt, not famous for tolerance. “Sometimes I overhear conversations on the base or in town that give me the shivers – ferocious, vicious gay jokes, or I’ll hear people say they’d beat the shit out of them, there’s even talk of mutilation.  I’ll gently question their Christian commitment, and wonder aloud if gays and lesbians can really be the demons they make them out to be.  Some listen, others won’t.  I just keep at it.”

He also cooks once a week at an AIDS hospice in Edmonton.  “I’ve lost friends to the disease, and I’ve seen people shunned and cast out for it.  No one should have to die like that – if I ever got that sick, I’d certainly hope there’d be someone there for me.”

Why does he hang on to such a medieval institution as the Church of Rome?  “Well, believe it or not the Church has always been a source of comfort for me.  Even when we disagree, it’s still my family, my community – or one of my communities.  Despite everything that’s been done to us, there are still significant numbers of us gays and lesbians in the Church, and we have all kinds of gifts to offer.  They can’t keep turning their backs on us.  The Church has to change, that’s all.”

Last I heard, the Vatican isn’t famous for being open to change.  “True enough.  And the day may come when I have to leave, as so many others have done.  But I won’t do it voluntarily, they’ll have to throw me out.  As long as I can, I’ll carry on, I’ll be a thorn in their side.  I’m Irish, you see, and very, very stubborn.”