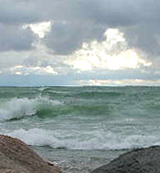 Jane Rule and Helen Sontoff settle to talk with me in their living room, each with a cigarette and a scotch at hand.  When they arrived on Galiano Island, they took their time making connections.  Jane: “In Vancouver we used to move in quite particular circles, mostly artists and the university crowd.  Living out here you find yourself dealing with a much wider range of people.  Ultimately I think it’s quite healthy when so many points-of-view have to co-exist.”  Helen: “At the post-office, or when you’re waiting for the boat, you’re always running into somebody who you know has quite a different political opinion from yours, but that’s no reason not to have a pleasant, open conversation.”
Social interaction here usually turns on local concerns – the fire department, the ambulance, the current battle to save former timber lands from being turned into subdivisions.  It may not always start out pleasant or open.  “I’d had run-ins with the
postmaster here.  The man was a little dictator,” says Jane. “He’d actually threatened people, he could have burned my mail.  So – I made him a plate of cookies.  The way I saw it, this was a frightened, silly man, and you had to deal with him as someone who needs help.  In my experience people have power only if we invest them with power.  And in a small community like this you can usually give people what they want from you – your help, your attention, your money – but you have to say, I will do it on my terms, this is who I am.  I think it’s so important to do that, to divest people of the power of their prejudices.”
Summer afternoons Helen and Jane open their swimming pool to local kids.  It’s a bigot’s worst nightmare, that children will witness with their own eyes two people of the same sex in a relationship as comfortable and natural as the surrounding trees.  Jane also teaches a bit, informally – young kids will drop by after school to be inspired for an hour or two.  These two Galiano matriarchs also pay a lot more than lip service to community economic development.  Helen: “Young people can only stay here on the island if they can find ways to support themselves.  We do what we can to help out.”  They invest in local businesses like a second-hand clothing store.  Their garden is tended, beautifully, by a young gay man who lives up the road.

When they have to go to the city, but don’t want to drive once there, someone else will do the driving.  Says Helen, “I really prefer to be driven by someone whose eyes are still working.”  A young woman comes by once a week to clean the house.  Jane: “The less able we are to cope with things, the more people seem to be available to help.  We help them, they help us – I think that’s how community ought to work.”
It’s late.  The dishes are done and put away, the table is set for breakfast.  By each of their places sits a little dish of pills.  Helen’s heart is tricky, and Jane’s arthritis has forced her to retire as a writer.  “I’ll still do short pieces now and then,” she says, “But if I sit more than two hours at the typewriter the pain is unbearable.  Anyway I believe I’ve had a good go at it.  I’ve said what I wanted to say, and I don’t like the idea of repeating things I’ve already said.”
At this stage in their lives, are they nervous of living on an island, so far removed from medical care?  Jane: “If you ask most people on this island if they aren’t too far from a hospital, they’ll say I hope I’m far enough.  When you get old, what the hospital does is not what you want.   In the last three years of his life, my father must have had ten operations, and all they did was deplete him and make his last few years that much harder to live.”

She draws a distinction between the island hospitals and the big ones in the city.  A few years ago when he was up for a visit her eighty-eight year-old father suffered a massive stroke.  He was taken to the small hospital on the next island.  “They treated him with great tenderness and care.  Being from the US, my mother was amazed that no one did anything to him just to make a buck.  After he’d been in a coma for four days, we asked them to take the IV out, to let him go, and they did.  If he’d been at home he could’ve have gone on for months or even years like that, because it would have been profitable for the hospital.”

“Canada is so much more civilized,” Helen adds. “So you see, rather than our location being a source of anxiety,” says Jane, “It’s actually quite reassuring to have the gentleness of a rural circumstance.