Yemen.  It’s in the news, briefly.  But not enough, not nearly enough. 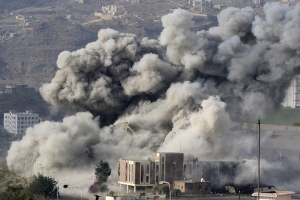 Ruling regimes in the US, UK and Saudi Arabia continue to rain down mass murder on this tiny country far, far away, on the southern tip of the Arabian peninsula.  This is their favourite kind of war, one of many directed from above, with impunity, by one US president after another, along with their collaborators and apologists.

As usual the big media reliably pour out a relentless blur of effluent as to the perpetrators’ motives, goals, and actions.  But really it’s not so complicated.  As in so many vicious wars far, far away, this one is about oil and control.  All the horror is merely collateral damage, invisible to the willfully closed eye.

However, up-to-date insight can be gleaned from a few sources, including yesterday’s post by the remarkably well-informed blogger Moon of Alabama, here.