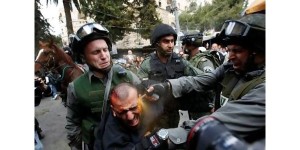 March 30 is Land Day in Palestine.  This year tens of thousands of Palestinians demonstrated against the theft and military occupation of their land, and the murder of non-violent protestors by Israeli forces on this day 36 years ago.  On Land Day 2012, at least one protestor was killed, hundreds injured.

Why do Palestinians keep risking their lives in non-violent protest?

Listen to Sarah Ali on the deep meaning of Land Day.  Sarah is 20, a student of English literature at the Islamic University of Gaza.  She blogs at sarahmali.wordpress.com and you can find her on twitter at twitter.com/Saritah_91.

I looked at his teary eyes, and, beholding something akin to happiness, I smiled.  The man I have always known to be my father was back.  He did not look like that unfamiliar block whom I could not really recognize during the last three years.  He was no longer that absent-minded, silent figure gazing at walls all the time and uninterestedly nodding whenever addressed by anyone at home.  He was there.  He was present.  He was actually listening as I went on bragging about a high grade of mine.  A phone call and a piece of paper signed by some Turkish-sponsored institution brought me back my father.  It didn’t matter what brought him back.  He was back; that was all that mattered.  I looked at his eyes again, this time more carefully lest my first glance should be false.  I saw that absolute happiness in my father’s eyes.  A big smile leaped my heart and made it to my face.  Again. 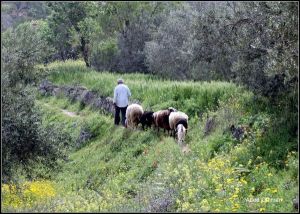 As we now commemorate Land Day, we honor the people who stood up for their land back in 1976 when Israel announced that thousands of Palestinian dunams would be confiscated.  During marches held to protest against that declaration of Israel, six people were killed.

The 30th of March brings back a memory of our Land, my father’s Land.  A couple of weeks ago we got a phone call informing us that my father’s name has been selected for a reconstruction program funded by Turkey. The program aims at helping Gazan farmers whose lands were damaged during the Israeli offensive in 2008-2009 to replant their trees.  It provides farmers with all types of facilitating materials like fences, tree seeds, and irrigation systems.  My father declined to apply for those organizations that gave financial compensations to farmers.  Unlike any other aid program, this program gives no money to farmers.  It instead helps them stand on their own.

‏My father was not born a farmer, nor was he naturally brought up to plant trees.  He studied economics and political science in Egypt and spent most of his youth working as a journalist, mainly a columnist writing about economic and political issues in Kuwaiti newspapers.  When he was back to Gaza, though, he had to take care of the piece of land my grandfather left for him years before.  It was not very difficult for dad.  He was born to a family of farmers after all.  Gradually the Land became more of a passion than a profession to my father.  It was one of the few things he cared about. It was the daily thing that kept him busy.  It was heaven on earth.

During those 23 days of the Israeli attack on Gaza, we were constantly receiving news of Lands being run over by Israeli bulldozers.  We were told thousands of trees were gone.  We were told my uncles’ trees were gone. We were told our trees were gone.  We were told the whole district of eastern farmland called Sharga was gone.  But these were false rumors, or so my father wanted to believe.  We all had hope that our land was still intact, totally untouched.  We were clinging to the assumption that only other people’s trees could get uprooted, but certainly not our beautiful, unmatched olives.  Certainly not the trees that were, to my father, the only thing he boasted of to prove he was no less of a Gazan than those who repeatedly reproached him for, as they put it, “recklessly leaving the land of black oil” where they assumed he swam in oil pools everyday, and for “coming to live here” with a small “h”.  My father looked at it quite differently, for Here, he always believed, is the land of the Holy Zait—the golden oil.  The golden Palestinian oil.

‏Gaza’s sky was blue again.  Things were over—the news said things were over.  My father pulled it together and went there.  He went to check upon the Land.  He put his faith in his intuition about his olives being an exception and he went there.  He put his faith in that little white spot in the heart of the bulldozer’s guy who, my father supposed, could not have resisted the beauty of our Land and who listened to his innate, good being that told him not to run over this land.  He had faith in the goodness of Man and he went there.  He put his faith in God and he went there.  My brother, who accompanied him, told us later that all they saw as they walked was ruined lands void but of the bulldozed, dead trees which seemed to suffice for the families need of firewood for years to come.  My brother said dad started crying as he saw people crying.  They went on.  They saw more trees laying down, feeble and defeated.  They went on.  There was the heaven.  The scene of our land was not shocking.  Simply put, our trees were no exception.  Our trees were gone.  A miscellany of affliction and denial took over the place.  My father’s faith, I could tell, was smashed into little pieces.  The world seemed like an ugly place.

One of our trees, that later became the interesting subject matter the whole neighborhood spoke of, was still standing there.   Just one week before 27/12/2008, my father told my brother how slanted this tree was and how quickly they needed to get rid of it.  They were planning to cut it, and yet, ironically, it was the only tree the Israeli army left (out of boredom or out of mercy, I cannot tell).  But it was still there.  And later whenever my cousins wanted to make dad feel less terrible about it, they made fun of the whole thing.  “How the hell did the soldiers know you were planning to cut it anyway and hence decided not to cut it themselves?” my cousins would remark.  Everyone would start laughing.  My father, though hysterically, would also join in laughing at the rhetorical, not-so-funny question.

‏When my father and brother were home that day, my brother started telling us about what he saw.  He told us that the trees were uprooted—”El-Shajar tjarraf ,” he kept repeating.  My father was in his room, crying.  During the weeks that followed my father’s visit to the Land, he had a daily schedule.  In the morning, he prayed and read Quran.  At night, he cried.

‏Speaking about the Land and the houses and generally the financial losses during or right after the Israeli offensive on the Gaza Strip in 2008 would have simply sounded very selfish and indifferent to others.  When you have people dying, you do not speak of your beautiful house that was leveled to the ground.  When you have people losing their legs and arms thus getting labeled as handicapped for the rest of their lives, you do not speak of your fancy car that once looked like a vase adorning the aisles of your modest neighborhood and that is now a bunch of gray wrecks letting go of a vulnerable piece each time someone barely passes by.  When you have a mother who buried her kid before she could say good-bye, you do not speak of your land and your trees that were mercilessly uprooted.  Those people speak.  They cry.  They mourn. You listen.  And for the memory of your insignificant, little misery, you grieve in silence.

‏This morning as I was writing this, I went to father so I would get accurate information about the trees that were uprooted, their numbers and their age.  ”Why are you asking? Are you applying for one of those charity institutions that offer some bucks and a flour bag instead of helping people plant their trees again?  Are you?  We do not need those!  The guy I met from the reconstruction program called last week, and they already sent laborers and farmers to start their job.  Do you still want to apply for charity?”

“No Baba!  I am just writing something for my blog.”

Embarrassed, I lowered my head and wondered why I was doing this to myself.  My thoughts were interrupted when he went on, “Next time you decide to do whatever it is that you want to do right now, get your numbers straight!”

I made no reply.

‏That an Israeli soldier could bulldoze 189 olive trees on the land he claims is part of the “God-given Land” is something I will never comprehend.  Did not he consider the possibility that God might get angry?  Did he not realize that it was a tree he was running over?  If a Palestinian bulldozer were ever invented (haha, I know) and I were given the chance to be in an orchard in Haifa for instance, I would never uproot a tree an Israeli planted.  No Palestinian would.  To Palestinians, the tree is sacred, and so is the land clasping it.  And as I talk about Gaza, I remember that Gaza is but a little part of Palestine.  I remember that Palestine is bigger than Gaza. Palestine is the West Bank; Palestine is Ramallah; Palestine is Nablus; Palestine is Jenin; Palestine is Tulkarm; Palestine is Bethlehem; Palestine, most importantly, is Jaffa and Haifa and Akka and all those cities that Israel wants us to forget about.