This is a small story, happens every day.  But still it needs to be told. 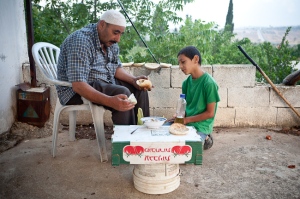 First the basic news item, sent by Israeli activist Dorothy Naor, then a little more personal detail about Hani Amer, the Palestinian farmer mentioned in the story.  Dorothy took me to meet Hani, at the farm he is now about to lose.

“Israeli occupation authorities have started to install a fence around the southern side of Azzun Atma in Qalaqiliya in the northern West Bank.

A two-meter high spiral fence was installed on about 1,500 meters running from the settlement of Oranit to the crossroads of Kafr Qasim and route 505, according to Abdul-Karim Ayyoub, the secretary of the local council.  ‘With this fence, Israel is isolating the area known as Beer al-Shilla, the artesian well, and about 800-1000 dunams (over 8,000 square meters) of fruit and olive groves.’

Hani Amer, who is in charge of the artesian well, said that neither the well nor the groves could be accessed anymore, as the Israelis have not left openings or gates leading to the well or to the dirt roads.”

That’s the story.  A friend of Hani’s, Dorothy Naor sent it, along with her own comment: “Apparently Hani and family are losing their lands and their wells to the fence, which cuts them off from their land.  Hani lives in Mas’ha, but his family lands are in Azzun Atma — used to be a 5 minute drive, now it takes an hour or more due to the road having been taken over by Jewish colonists, with no Palestinians allowed.”

The Amer family have already endured a long series of assaults by settlers and soldiers.  On a day-trip into the occupied West Bank, Dorothy Naor introduced me to Hani.  I wrote of our encounter in Our Way to Fight, at the farm he is now about to lose:

We [Dorothy and I] clamber over the military barrier, continue on foot, then climb onto the roof of a small outbuilding surrounded by olive trees.  At midday the air is still and baking hot.  A sparse woody vine offers thin but welcome shade.  Among the silver-grey olive leaves I see the precious fruit, still green but tinged with blue, a month before harvest.  Then Hani arrives in a rusty Toyota that’s burning oil.

He’s broad and sturdy, walks heavily, supported by a stick.  Black hair under a white cotton cap, mustache on a sun-browned face deeply etched by weather and history.  Hard hands, a gentle grip.  We set out three plastic chairs on the roof.

I ask how long he has farmed.  “All my life,” he says, “like my father, my grandfather and before.  The Israelis make it harder all the time.  I’m only 51, but I’ve seen more destruction in my lifetime than you would in 1000 years living somewhere else.  The only thing that doesn’t change is the olive trees.  They are still here, thanks to Allah.”

What does he grow?  “Olives, figs, apples, grapes, avocadoes, lemons, clementines, peppers, cucumbers, tomatoes.”  Where does he sell them?  “Nablus, Qalqilya.  It’s hard to get there – you need permits, and sometimes you get them, sometimes you don’t, so transport is very expensive.  With the fence it’s also difficult to get workers for the farm, often they can’t get here.”

An ancient farmer in a faded grey djellabah emerges from the olive grove, on a wagon pulled by a donkey.  Marhaba, he and Hani call to each other, hello.  He needs water.  Hani replies that he doesn’t have any, but he’s working on it.

I ask Hani if water is getting scarce here, as I’ve heard.  He nods.  “For the past ten years it’s drier than it used to be – last winter there was hardly any rain.  A few more years like this and there won’t be any water left to pump.”  [MR: He refers here to the artesian well that the Israelis are now preparing to steal.]

Here the weather is shared, but not the water.  According to a 2009 study by the World Bank, Israel controls all the water sources, but allocates to Palestinians only 20 percent of the water.  It is forbidden for Palestinians to drill new wells, forcing them to buy water if they can from the Israeli national water company, Mekorot, at highly inflated rates.  The World Health Organization reports that water consumption in many parts of the West Bank has fallen well below basic needs.

Dorothy tells Hani that we have to move on.  She wants to bring a group from Austria to meet him next week, would that be alright?  “Beseder,” he says, Hebrew for okay.  I ask him, does he get tired of telling his story to foreigners year after year?  “It’s easier for me,” he says.  “This way I get my pain out, instead of keeping it to myself.”

For more on the Amer family, this short video is a good place to start.

A small story, happens every day in occupied Palestine.  But still it needs to be told.  Please pass it on.