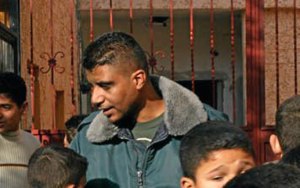 Zakaria Zubeidi’s release from prison has been postponed yet again, Palestinian Authority officials announced, for 8 more days of “additional investigations.”

Zakaria co-founded the Freedom Theatre with Juliano Mer Khamis.  [For more on the theatre, see Our Way to Fight, chapter 2.]  He has already been held four months by the Palestinian Authority without any charge or evidence of wrong-doing.   [MR: The Palestinian Authority makes no secret that its American-trained police collaborate closely with the Israeli occupation regime.]

In protest, Zakaria announced today that he will embark on a food and fluid strike, in effect a death fast.  Unless the Palestinian Authority can be pressured to release him, he will probably not survive through the week.

Throughout his imprisonment, which is illegal by international law, his rights has been severely violated, as detailed by Human Rights Watch, among others.

Israeli authorities arrested the company’s artistic director, Nabil al-Ra’ee, in June, held him incommunicado, and allegedly subjected him to physical and psychological ill-treatment that may have amounted to torture, Human Rights Watch said.  Zubeidi’s lawyer and al-Ra’ee were recently released, but all three men still face charges.  [MR: Israeli military courts, the only ones permitted in the occupied West Bank, operate by their own laws.]

“Israel and the Palestinian Authority are trampling on the rights of the Freedom Theater’s staff,” said Joe Stork, deputy Middle East director at Human Rights Watch.  “A theater should be able to offer critical and provocative work without fearing that its staff will be arrested and abused.”

The theater’s director and co-founder, Juliano Mer-Khamis, an Israeli citizen and activist, was killed in April 2011.  Since the killing, Israeli occupation forces have repeatedly raided the theater and beaten and arbitrarily arrested employees.  Israeli authorities claim that they suspect theater staff of involvement in Mer-Khamis’s killing, but have not charged anyone with the crime, and have not provided any evidence to support their claim.  The Palestinian Authority appears to be abusing the theater’s staff because of the company’s criticisms of the PA’s rule.

Productions of the Freedom Theater have often criticized the Israeli occupation of the West Bank, as well as abuses by both Israel and the Palestinian Authority.  Like Zakaria Zubeidi, some staff and acting students are former members of Palestinian armed groups who renounced violence in favor of non-violent opposition to Israeli and PA policies.

Human Rights Watch declared that the arbitrary arrests and detentions should cease, and allegations of mistreatment should be investigated.

[MR:  I understand that Israeli activists are starting a petition for Zakaria Zubeidi’s release.  As soon as it’s available, I’ll post the link.]