An update on Zakaria Zubeidi, still on a ‘death fast’ in the occupied West Bank to protest his illegal detention by the Palestinian Authority: 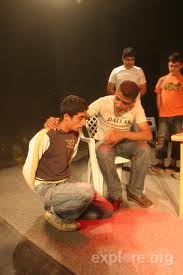 Zakaria Zubeidi told a Palestinian court in Jericho on Monday that he would not eat, drink or speak until he is released, after his four-month detention without charge was again extended.

During the second intifada and Israeli invasion in 2002, Zubeidi led the Fatah-affiliated Al-Aqsa Martyrs Brigade in Jenin.  He left it to take up the cultural struggle, co-founding the Freedom Theater in Jenin refugee camp in 2006.

Last Thursday, Zubeidi agreed to partially suspend his earlier fast by taking fluids, after he received assurances from a presidential delegation that he would be freed from Jericho civil jail in five days.

But at a court hearing on Monday the judge extended his imprisonment for a further 19 days, citing the need to give the prosecution more time, Zubeidi’s lawyer Farid Hawash said.  [MR: It’s important to note that the Palestinian Authority collaborates closely with the Israeli military, which continues to harass the Freedom Theatre with arbitrary arrests and no charges.  The PA also targets the theatre because some of its productions have been critical of the regime.]

Zubeidi was detained by PA forces on May 13 and his detention has been repeatedly renewed without charges being pressed.

Witnesses said Zakaria warned the court “you will take a funeral from Jericho to Jenin in four days,” noting that he was looking gaunt and had trouble speaking clearly. He has refused food since last Sunday.

After the judgment, supporters in the court started chanting “Shame, shame, is this Palestinian democracy, you are no better than the Israelis.”

Zubeidi’s lawyer Farid Hawash told Ma’an he regards the court decision as illegal as Zubeidi has already been jailed without charge for longer than is permitted under Palestinian law.