If the truce holds, life in Gaza goes back to normal.  (For the 104 civilians killed, one third of them children, it’s too late.) 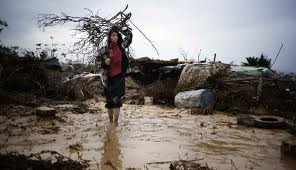 In Gaza, for the survivors a return to normal means:

Israel continues to impose its suffocating, illegal siege on 1.6 million Palestinians in what UN officials have called “the world’s largest prison.”  For a compact, stark account of the siege, read Sara Roy in The Boston Globe, ‘Where’s our humanity for Gaza?’  Sara Roy is senior research scholar at the Center for Middle Eastern Studies, Harvard University.

Fresh water in Gaza continues to disappear, and becomes increasingly undrinkable because Israel prevents access to the materials needed to repair and operate the water purification plant which it bombed.

Reconstruction after each Israeli assault depends on materials which Israel blocks from entry through the checkpoints, the prison gates.  Similarly the medical supplies to repair human damages.

And so on, in every sphere of life.

Meanwhile, the United States continues to prop up Israel unconditionally with billions of taxpayer dollars, while the US economy fails most of its own population.  Current regimes in Canada, Britain, Australia and most of Europe continue to grant Israel carte blanche to do as it wishes.

At the same time, BDS – the international movement for boycott, divestment and sanctions – continues to grow, as the most effective way for the rest of us to challenge these crimes.