Twenty-five years ago this month, young Palestinians launched an uprising that came to be known as the First Intifada.  It wasn’t the first uprising against the Israeli military occupation of Palestine, but the first to reach widespread international attention. 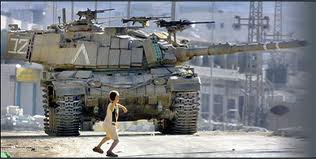 This riveting account by Sandy Tolan, published yesterday on Mondoweiss, documents its roots and its course.  Author of The Lemon Tree: An Arab, A Jew, and the Heart of the Middle East, Tolan is an associate professor at the Annenberg School for Communication and Journalism at USC.

On December 8, 1987, in the Gaza Strip, four Palestinians were killed when an Israeli truck or troop carrier veered into a long line of cars carrying day laborers home from Israel.  This was the spark that lit a furious response, and spread quickly from Gaza across the West Bank and into the refugee camps.

Boys and young men known as the shebab forged the front lines of what started as a spontaneous eruption against the killing of the four workers, but was fueled by a much deeper anger at decades of foreign rule.

For more than 20 years, the occupying power had dictated nearly every aspect of public life.  Israel ran the criminal and military courts, banned and approved textbooks, erected roadblocks and checkpoints, and levied special taxes so that, in effect, Palestinians were paying to be occupied.  Permits were required to dig a well, plant a tree, repair a house, raise chickens, or travel to Jerusalem, the spiritual heart of the Palestinians for Muslim and Christian alike.  National flags were banned, schools and universities shut down, protest leaders expelled to Jordan or Lebanon, and young men routinely rounded up and placed in “administrative detention” for weeks or months without charge.  By 1987 the military had built a vast intelligence network, paying local spies, or issuing them coveted travel permits, in exchange for their eyes and ears in the camps.

The shebab were but one element of what became, for a time, an exceptionally unified, clandestine and well-organized campaign of national resistance.  The atfal al hijara – children of the stones – were only the most visable symbol of the first intifada, or uprising: the vanguard of a war of liberation that cut across class, religion, and political affiliation.

The people’s leaders in the Palestine Liberation Organization were in exile, in Tunis and Algiers, but quickly an anonymous local command emerged.  Unambiguous directives —  demonstration Noon today, at Manara; general strike tomorrow, no business may open — appeared overnight, scrawled on the camp walls, scattered in unattributed fliers, or shouted out by Palestinian fruit market vendors amid their cacaphonous hawking of watermelons and figs.

Chicken coops and rabbit dens rose up in the courtyards of the wealthy and the rooftops of the refugee camps.  Dozens of rabbits quickly became thousands; secret food committees distributed eggs and fresh meat throughout the cities and villages.  Squash and tomatoes sprouted in forbidden “victory gardens.”   Rice, lentils, potatoes and olive oil were hidden in neighborhood caches, then distributed in the small hours to the doorsteps of needy families, breaking the military curfews.  Education was improvised:  As the authorities shut schools and universities, teachers secretly met their students in parents’  living rooms, behind hedges, under olive trees, and even, sometimes, in caves. In Al Amari refugee camp beside Ramallah, local leaders formed solidarity committees.  Clandestine food deliveries arrived by truck late at night, dropped off quickly in the back of a volunteer’s home and passed along in a house-to house chain by the distribution committee.  The neighborhood protection committee included children who shouted jeesh! (army!) at the sight of entering jeeps or soldiers, and women who relayed the warnings by banging rocks on a successon of resonating electrical poles.  Secret ballots to elect board members to the popular committees traveled from family to family, hidden in the folds of women’s clothing. Local mothers in the social committee organized visits to the families of youths arrested and held under administrative detention.

In the face of this the military authorities intensified their crackdown.  Commanders seized a four-story stone building at the entrance to Al Amari, affording a view of the entire camp.  Snipers perched on the roof as jeeps and armored trucks entered the camp and soldiers spilled out for foot patrols through the veins of Al Amari.  Soldiers of the day recall three basic tasks ordered from on high:  remove all Palestinian flags and obliterate graffiti; find and detain suspected organizers and militants; chase the children and young men throwing stones.

Job one was obliterating any expression of nationalist sentiment, especially the banners of green, black, and white, with a red triangle pointing left to right: The Palestinian flag.  Each morning soldiers would find the flags flapping from telephone or electrical poles.   They’d pound on a few doors, order the men out, and command them to select a volunteer to climb up and take down the banned national colors.  They ordered the women to remove the slogans and directives splashed nightly on the camp walls.  Graffiti removal was so common that some families had a bucket of white paint by the door. At night, the women would sew more flags — sometimes stitching the banner of Palestine right into their clothing — and the next day the ritual would begin again.

The night raids in search of suspected troublemakers were more aggressive.  Thirty soldiers would surround a house, covering all the windows and possible exits; another thirty, in a wider ring, formed a second line of detention. “You’d probably knock with your rifle,” remembered a soldier who patrolled Ramallah back then.  “Two o’clock in the morning, you would round the whole family up.  Women, children, grown ups, try and identify the person you are looking for. About 80% of the time he wasn’t there. And then you’d search the house. Opening up all the cupboards, looking between the clothes, going through the pantry.  Basically, we’d just trash the place.  That would happen most of the time.”   Soldiers rummaged through stores of grain, searching for weapons:  “More often then not you wouldn’t find anything. Or at the most you would find a kitchen knife.”

“The Palestinians rarely used firearms,” acknowledged an Israeli brigadier general of the day, “partly because they hardly had any.”

Yet the searches became legendary in the camp.  Ramzi Aburedwan, who grew up in Al Amari and became one of the children of the stones, remembers the time soldiers burst into his grandfather’s house, dumped out the family’s stores of flour, sugar, olive oil and rice, and, with the butt of a rifle,  mixed them together on the floor.  “They destroyed everything.”

A soldier of the day recalled: “It would basically depend on the whim of the commander on that night.  If he was unhappy with his life, or his girlfriend, or he just wanted to go back, or he’s just angry at something, he can take it out.  And it wasn’t just the commander.  I mean, soldiers would take out their personal grief on whoever was around, because they were in a position of power.  Because they could.”

Israeli authorities had initially dismissed the Intifada as a series of temporary local disturbances.  “Our goal is to put down the uprising, to reinstate law and order, and to return life to normal,”  Israeli commander Amram Mitzna wrote to his soldiers in the Central Command in 1988.

When normal life did not return, Defense Minister Yitzhak Rabin instituted a policy of “force, might, and beatings,” which included, it was revealed later, permission granted to IDF soldiers to break the bones of stone throwers.  But the military’s belief that the iron fist would quell the demonstrations proved unfounded.  Instead, it sparked more.

At Al Amari, women gathered rocks from nearby hillsides and ferried them onto waiting vehicles. Clandestine search parties scoured the dumps and hillsides for discarded tires.  Volunteers filled plastic jugs with petrol, carrying them swiftly and secretly back to the camp. Sometimes the shebab hurled stones, or, far less frequently, a Molotov cocktail, at a settler driving through town.  But the soldiers were the main targets.

The confrontations at Al Amari began in the afternoons, often after Friday prayer.  Young men and boys would drag heavy stones or concrete blocks across the road, to keep the jeeps from entering the camps.  They’d adjust their homemade leather rock launchers and slingshots — eight-year-old Ramzi made one from the laces and tongue of an old shoe — or rotate their arms like baseball pitchers warming up in the bullpen.  To protect their identity, the older shebab wrapped their faces in checkered keffiyas. They eyed the soldiers, perhaps 80 or 100 yards away, at the ground floor of the four-story stone building.  Then they poured the gasoline and lit the match.  From the blazing tires, twisting black colums rose above the camp, signaling the start of another day of battle.

“Televisions screens throughout the world presented the Israeli military occupation in the most ugly light,” observed Gazit, the Israeli brigadier general, “with Israel’s armed, well-protected and clumsy soldiers trying in vain to deal with agile Palestinian kids throwing stones at them and making fools out of them.  It was a David and Goliath battle of sorts, this time with the Palestinians in the role of David and receiving the world’s sympathy.”

In the role of David was Ramzi Aburedwan himself.  During a clash on a cold winter day in 1988, the eight-year-old became a visual symbol of the uprising.   He wore blue jeans and tennis shoes; his red jacket with the faux-fur collar was flying open.  He faced an Israeli jeep.  In his left hand he clutched a rock nearly half the size of his head.  His raised right arm was drawn behind him, the hand wrapped around a stone.

Ramzi’s eyes conveyed a mixture of anger, fear, and resolve.  His arched eyebrows seemed to say, Here we are.  His left foot was planted, and he was stepping forward with his right.  In one more second, the stone would fly.

In that instant, a photojournalist – it’s still unclear who snapped a picture.  At first, it ran in the local papers in Israel; a day later it ran in the Arabic-language papers, delivered across town by Ramzi and his fellow newsboys; soon it would transmitted to newspapers around the world.  The image was later reproduced on posters across Europe, depicting the rage and apparent fearlessness of the children of the stones.  It would become perhaps the single most recognized image of the Palestinian intifada.

Ramzi had suddenly become a child legend of his people’s uprising.

There were times, in full flight from the soldiers, when a strange sense of protection would settle over Ramzi.  He could feel his sneakers grabbing the dimples of the tin roof; he could watch his limbs pumping in a perfect rhythm with his panting breath.  In moments like these, there wasn’t time to put words to a prayer, but he put out the energy of a fragmented offering:  God, I love you, I need you.  I need to be alive.  There was nothing more in the world that could help him; a bullet would whiz past, and he’d understand his life in terms of centimeters.  Oddly, in times like these, he often felt protected: buoyed, lifted, and cared for as he ran and ran, sprinting from rooftop to rooftop, leaping toward an imagined freedom.

One thought on “‘Children of the stones’”