From David Shulman in Jerusalem, January 4, 2013.  He teaches at Hebrew University, and wrote the book Dark Hope. 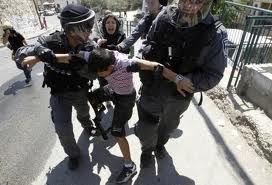 — I meet the drummers on the city bus to French Hill. They ask me: “Are you going there?”  Yes. Smiles.  I tell them I’m happy to see the big drum again; it brings up good memories of Sheikh Jarrah, the demonstrations two years ago and more. There the drums made all the difference.  They say to me: “You’re an honorary drummer.”  Now that’s worth putting on my CV.

— The Border Police are, of course, waiting for us at the gas station at the edge of the village. Quite a lot of them and, at first glance, far too few of us.  Even the contingent from ‘Isawiyya that marches uphill to welcome us and guide us in is sparse, too sparse. I’m expecting a violent response by the soldiers today in line with recent developments. I wonder: Will I ever get used to this? I have a strong, demoralizing sense of déjà vu. I’ve trained myself not to be afraid of the tear gas and the stun grenades and the clubs and even the rubber bullets, but I don’t like them.  Slight rumbles in the pit of my stomach.

The last weeks in the village have been mostly full of such things. There’s a familiar, periodic quality to such attacks in ‘Isawiyya; we’ve been through many cycles over the years. The soldiers come in to shoot, to terrorize; at night they turn up to make arrests. Quite often I hear and see all of this from my office in the Rabin Building on campus; our windows look out directly on ‘Isawiyya, a stark vision of the Occupation you can’t ignore. So I sit amidst my books, next door to the espresso machine, and watch the soldiers playing their deadly games just a few hundred meters away. Sometimes there are pitched battles in the village streets. Most days this week, along with the usual army jeeps and police vans that prowl up and down the hill there were helicopters hovering above.

The frequency of the attacks is impressive. My friend Muhammad Abu-Humus tells us that every two hours or so more soldiers turn up. There’s no longer day or night. Children can’t get to school; the soldiers shoot at anyone who moves outside. You can’t even go out to buy groceries. Many children have been arrested. One child lost an eye to a rubber bullet. I meet another boy, maybe seven years old, with his left eye sunk deep into folds of skin and scars; he has some eye disease, and when they arrested him and threatened him, the left eye hemorrhaged, apparently from sheer terror, and now it looks like it’s gone forever. What can you say to him? “I’m sorry.” A young man who was trying to photograph a raid by the soldiers was shot in the neck with a rubber bullet. Along with such routine matters, there is a campaign of more or less continuous harassment. The police hand out fines to ‘Isawiyya drivers for no particular offense; over the last few years, by the villagers’ calculation, they’ve paid something like one and half million shekels in such fines.

Why now? The best answer is probably: Why not? ‘Isawiyya happens to be part of Jerusalem, annexed in 1967. They are, however, treated like occupied aliens. “It’s harsh Occupation,” says Ahmad, a passionate orator, “for the sole purpose of frightening us. A daily horror. We will resist—not with guns or stones but with our inner strength. What we demand is:  dignity. Honor, honor, honor.”

But one can also imagine other reasons that might make sense of the timing. Maybe it’s a vicious response to the successful Palestinian moves at the UN in the autumn. Even more likely is a linkage to the plans to build more settlements and a huge park in the area known as E1, thus effectively cutting the West Bank into two discontinuous halves.  Much of this will take place on the ‘Isawiyya lands.  After 1967 they were left with a mere 750 dunams out of what was once a vast area for farming and pasture.  They’ve been informed now that over half of this tiny residue will be appropriated.  The villagers think the present wave of violence is part of this grand design.

— Then there’s the case of Samir al-‘Isawi.  Arrested in Ramallah together with Marwan Barghouti during the second Intifada, active in the resistance, he was serving a 30-year sentence when he was released in the Gil’ad Shalit exchange.  He was, they say, trying to build a new life.  He bought a car and was about to get married.  One day he took the car to Ar-Ram, just outside Jerusalem; he didn’t realize it was out of bounds to him as an ex-prisoner.  By bad luck he was stopped by a soldier at the checkpoint on his way back.  Now he’s in prison again, without trial.  Together with others, he’s been on a hunger strike since August 1—over 150 days.  He takes only water, and his condition has severely degenerated; he may soon die.  He has lost sensation in his extremities, vomits blood, suffers severe pain in his head, chest and abdomen.  Needless to say, he is very weak.  When he was brought to court on December 13th for a hearing about possible bail—which, incidentally, he has refused—his mother and siblings tried to embrace him and were immediately arrested, and Samir was beaten. His mother says she can’t bear this, watching her son die.

So ‘Isawiyya has organized solidarity marches, and you can see Samir’s picture on lamp-posts and walls. “We are all Samir.” The red-white-black poster reads: “Al-Idrab mustamirr hata  ‘l-huriyya, “The strike continues until Freedom.” They have taken us down the steep hill into the village to visit Hani, Samir’s uncle, a dignified, elegant, lucid man.  We crowd into the small courtyard under the vines.  Toughness runs in the family.  Long ago, in the early 80’s, Hani, who served 10 years in prison along with long periods of house arrest, went on a hunger strike to restore minimal conditions in the jail. It went on for many weeks and was ultimately successful.  He tells the story simply, without pathos, when I take him aside and ask.  No self-pity, but there’s pride, or honor; a twinkle in his eye.

— We have a long history in ‘Isawiyya.  Walking with Yuri, I recall the demonstration in February 2002 when we took apart the roadblock with our bare hands and the police were on horseback and charged us, happily smashing us with their clubs.  Many were hurt. “That,” I say to Yuri, “is when I learned you can’t reason with a horse.”  “Actually,” Yuri says—he’s a mine of useful information—”there is a way. Horses will stop dead in their tracks if they smell lion shit.”  Must be some evolutionary trait.  For a moment we wonder if what’s left of the Israeli peace movement should import supplies from, say, Kenya—unless, Yuri says, we happen to know someone at the zoo.  It’s good to go to demonstrations, you learn things you never knew.

— And these are the good days.  Unless there’s some miracle, the elections in less than three weeks will produce a government of the even-more-extreme right; a Fascist government, why evade the word? Israel is not the only case where democracy brings Fascism to power. We have good reason to be afraid. War with Iran is not unlikely. Grim restriction of civil rights is almost certain. Hatred of Palestinians and overt racism rule the streets. We exhaust ourselves in futile gestures that cannot stem the tide. We are still fighting, and losing, at every step. The last days have been devoted to an attempt to stop Tel Aviv University from excavating in Silwan under the indirect aegis of El’ad, the Israeli settlers’ organization that runs things there and that we are sure is subsidizing the excavation via the Israel Antiquities Authority.  This is how the Occupation works:  little acts of compliance, day by day, easily rationalized.  “Everyone is doing it.”  “It’s just a small matter after all.”  Why not cut the corners and go along, like all the rest?  For institutions like a university, the temptation is almost irresistible.  Examples are literally endless.  For individuals, too, there is, in general, either passive compliance or active collusion (rather a lot of the latter).  So a monumental crime moves forward with a thousand tiny steps each day.  Today, too.  I say goodbye to my new one-eyed friend, who puts his little hand in mine.

David adds:  If you would like to add your signature to the petition against Tel Aviv University’s excavation in Silwan, as explained in the report, you can easily do so here, at the website of Emek Shaveh [an Israeli organization for archeology and human rights].