In April 2012, the government of Canada announced that it would close the world-renowned Experimental Lakes Area (ELA) in northwest Ontario.  Since 1968 the world-renowned research station has hosted a unique whole-ecosystem approach to studying how lake ecosystems and fish respond to human and natural disturbances.  The resulting data, unattainable anywhere else, is essential for objective, evidence-based decision-making. 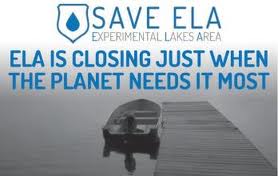 Within hours of the closure announcement, marine biology PhD candidate Diane Orihel launched an international campaign to save the ELA.

Two years later, victory!  Today the grassroots Canadian organization Evidence for Democracy announced that a final agreement has just been reached to transfer operation of the ELA to the International Institute for Sustainable Development (IISD), based in Manitoba.  It will be backed by the governments of Ontario and Manitoba, which appear to be less hostile to evidence-based decisions and policies.

For more on the vital connections between science, evidence and democracy, Evidence for Democracy offers two public events:

5 pm, Thursday April 3, Dr. Munir Sheikh, former Chief Statistician of Canada, on why public policy needs to be informed by evidence.  The event will be live streamed. Details here.

Governing in the Dark, a recent public talk by Canadian biologist Scott Findlay can be seen or read online, here.

In dark times, signs of hope.

Follow the Save ELA story in Bold Scientists: dispatches from the battle for honest science, coming from Between the Lines, autumn 2014.