With remarkable foresight, in March an NDP member of the Ontario legislature, Peter Tabuns, introduced a bill (proposed law) to ban fracking in Ontario.  (Fracking = hydraulic fracturing of the earth’s crust for gas and oil.)

With remarkable stupidity, the ruling Liberal government immediately denied any need for such a bill. There is no fracking yet in Ontario, said Natural Resources Minister Bill Mauro, so there is no need for a ban.  More detail here. 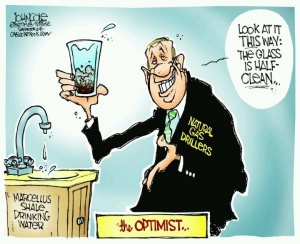 Without a ban, the door stays wide open. Wherever the door is open, oil and gas corporations walk right in and start drilling. And wherever frackers drill, disaster follows.   Ask people on what’s left of the ground in Ohio, Pennsylvania, Texas, the Dakotas, south England…

Fracking consumes and poisons millions of litres of fresh water – for every well. The drillers inject a toxic brew of chemicals under high pressure to smash underground shale and force oil and gas to the surface. Fracking operations leak vast quantities of methane, a devastating greenhouse gas. They also set off earthquake epidemics where such incidents have been rare.  And then there are the pipelines to transport the gas/oil to refineries and ports, and with pipelines, spills and explosions.

Result: Immense profit for a few, incalculable harm for the rest of us and the earth.

Worldwide, as soon as people become informed about fracking, resistance grows rapidly, and people have won government bans and moratoria in many municipalities, provinces, states and countries. Check here for an up-to-date list.

Meanwhile in Ontario, the door – our door, by the way – remains wide open.

In a 2014 poll, 75% of Ontarians supported a moratorium on fracking.  As Peter Tabuns understands, the time to close the door is now, before it’s too late.

The bill to ban fracking is scheduled to come to a vote on May 7, a week from now.  Send a message to Premier Wynne, via a new email campaign from the Council of Canadians: Ban fracking in Ontario. Close the door now.

The underground story on fracking and the growing resistance is here, inside Bold Scientists.  Scroll down to chapter 10, The unsolved problem.