On South America’s teleSur, journalist Joe Emersberger interviews lawyer Stephen Donziger on a crucial case with huge implications for us all.

Donziger: “The fact top law firms around the world are helping the Ecuadorean villagers is terrifying to Chevron and the fossil fuel industry and completely changes the risk calculus of oil drilling in delicate ecosystems.  These firms normally represent the oil industry; now they are representing groups fighting that industry. That’s never happened before.”

The interview is here.

True, this couldn’t happen without the lawyers.  But before, during and after the courts have their say, again and again it’s people who live on the land and water under siege that have to hold the front line.  Against Dakota Access, Enbridge, Line 9, Kinder Morgan, Energy East and all the other petro-invaders.

If our planet is to remain livable, these are the first people we should thank, and support.

The more people learn about the extreme dangers of bitumen, tar sands oil slurry, the more resistance grows along the planned routes of pipelines to transport the toxic muck across country to refineries and coastal ports.  And as resistance grows, so do propaganda and dirty tricks from the industry and its partners in government. 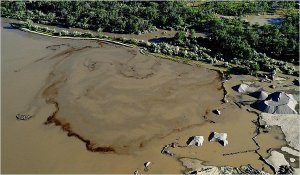 A new must-read exposé from PRWatch, a US-based investigative research group, takes an inside look at what we can expect in the escalating battle over the proposed TransCanada pipeline from Alberta to Quebec/New Brunswick, aka “Energy East”:

“Leaked documents expose a plan for TransCanada to launch an ‘aggressive’ American-style PR campaign to persuade Canadians to support a Canada-based alternative to the stalled Keystone XL pipeline, to get controversial tar sands oil to refineries in eastern Canada for export. [MR: Prices are higher overseas, and diminished domestic supplies will ensure higher prices here, too. Oil-pushers call this a win-win situation.]

“According to the documents, this Canada-centric campaign would actually be run out of an office in Washington, DC. And the digital campaign is being led by a rightwing American political operative employed by the world’s largest public relations firm…”

Their battle plan includes investigations [read: attacks] on Canadian groups opposing the pipeline, and recruitment of buyable scientists “to build an echo chamber of aligned voices.”

The dirty details are here.

For an antidote, a dose of honest science, see chapters 9 & 10 in Bold Scientists.  Read excerpts here.