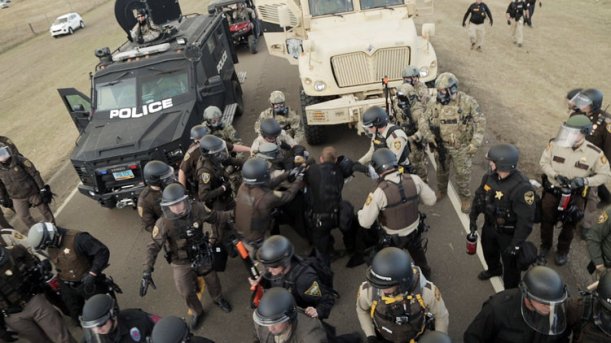 As early winter chills the Dakota plains, a brutal war continues to escalate against Indigenous people defending land, water and life from the invading Dakota Access Pipeline (DAPL).  The pipeline is meant to carry 500,000 barrels of toxic crude oil per day from North Dakota to Illinois.  From years of bitter experience, catastrophic spills should be expected.

The project has faced determined resistance for months from the Standing Rock Sioux and members of nearly 100 indigenous peoples from across the U.S. and Canada.  They carry on a centuries’ long struggle against colonial invasion and violence throughout the Americas.

By now 100s of defenders have been arrested, clubbed, pepper-sprayed, and maced.  Updates here, and here.

Solidarity protests are being held and planned across the US and in Canada.  For those of us who care but are unable to participate, action is still possible:

Behind the uniformed bullies with their military and chemical weapons, attack dogs, sound-cannons, assault vehicles and helicopters, lurk corporate oil/gas plunderers (in this case aka “Energy Transfer Partners”), and behind them hired governments, and behind them all, the international banking mafia safe in their glittering towers.

As well as raking in massive subsidies from governments, the pipeline builders also need major financing from banks.  According to researchers at the US nonprofit Food & Water Watch, the $3.8 billion DAPL is financed by 17 banks in the US, Canada, Japan, Britain, France, Germany, Spain, Italy, Holland, Switzerland and Norway.  All of them have the power to determine who gets financing and for what.

Contact information for the CEOs of DAPL-complicit banks is here.

Among them are three Canadian banks.  One of them, TD (indicated by *), is directly complicit in the Dakota pipeline, and all three of them provide financial backing to the vast Bakken pipeline network, of which DAPL is one piece.

Everywhere on this earth we have plundered, blasted, torn, drilled, stripped and otherwise devastated “beautiful, quiet, complicated” landscapes that sustained us for millennia. Add destruction of the other two life support systems, water and air, and we dig our own graves.

One such fragile landscape is the badlands region of North Dakota. Unfortunately it’s also the centre of the decade-long Bakken shale oil boom.  In The cradle of conservation, a touching – literally, touching – account in Earth Island Journal, conservation writer Taylor Brorby revisits the state where he grew up, and wonders what might still be recovered here after the boom has died.

As in the northern Alberta tar sands, enormous profits have been extracted here, and incalculable harm done.  Now oil prices have plummeted, but still, with lavish government subsidies the plunder goes on.  So does resistance on the ground.  One way or another, eventually the plunder – or the oil – must come to an end.  And as in any disaster, those who remain will recover what they can.

For further insight into the nature, value and recovery of living landscapes, check out Bold Scientists, here.  Scroll down to chapter 3, A dialogue with the world.