“Now comes my favorite time of day in jail—the two quiet hours between breakfast and 7 a.m. before the television clicks on and we are ordered to make our beds and the loud day begins…” 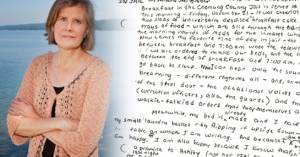 Biologist and author Sandra Steingraber hand-wrote this letter from her cell in a New York county jail, writing on scrap paper provided by a fellow inmate, a young mother jailed for stealing a pumpkin.

Along with other resisters, Steingraber was jailed for non-violent civil disobedience. They tried to block the driveway of Texas-based Crestwood Midstream, which is pursuing a lunatic scheme to store under high pressure toxic products of fracking/hydraulic fracturing – methane, propane and butane – in abandoned, crumbling salt mines adjacent to Seneca Lake.

So far in the Seneca Lake campaign, 59 people have been arrested. The majority await sentence.

They consider the cost of doing time very small compared to the cost of doing nothing.  Steingraber writes, “…Time offers the possibility of rededicating oneself to the necessary work ahead: dismantling the fossil fuel industry in the last 20 years left to us, before the climate crisis spins into unfixable, unending calamity.”

More on the ominous links between fracking and climate chaos, and the powerful interests driving both, here.  (Scroll down to chapter 10, The Unsolved problem.)