In 1907 British civil servants prepared a report on the Middle East for the Prime Minister, Sir Henry Campbell-Bannerman. As the United States does now, the British imperial regime treated the rest of the world as its private estate.

A key paragraph of the Bannerman report lays out the foundation for all that followed, including the current assault on Gaza:

“There are people [MR: the inhabitants of the Middle East] who control spacious territories teeming with manifest and hidden resources. They dominate the intersections of world routes. Their lands were the cradles of human civilizations and religions.  These people have one faith, one language, one history and the same aspirations.   No natural barriers can isolate these people from one another … if, per chance, this nation were to be unified into one state, it would then take the fate of the world into its hands and would separate Europe from the rest of the world.  Taking these considerations seriously, [bold added] a foreign body should be planted in the heart of this nation to prevent the convergence of its wings in such a way that it could exhaust its powers in never-ending wars. It could also serve as a springboard for the West to gain its coveted objects.”

“His Majesty’s government view with favour the establishment in Palestine of a national home for the Jewish people, and will use their best endeavours to facilitate the achievement of this object, it being clearly understood that nothing shall be done which may prejudice the civil and religious rights of existing non-Jewish communities in Palestine, or the rights and political status enjoyed by Jews in any other country.”

Just like that. So easy.  At the stroke of a pen. 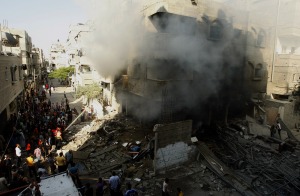