The story of Palestinian political prisoner Khader Adnan has largely been shut out of mainstream media in many countries, especially the US, Canada, Britain and Australia, which continue to provide Israel with carte blanche to do as it wishes, regardless of international law. 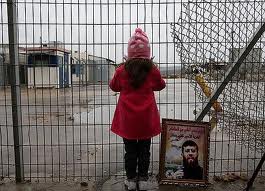 Richard Falk is Professor Emeritus of International Law at Princeton University and Visiting Distinguished Professor in Global and International Studies at the University of California, Santa Barbara.  He is currently serving his third year of a six-year term as a United Nations Special Rapporteur on Palestinian human rights.  He has written extensively on international law.

“The world watches as tragedy unfolds beneath its gaze.  Khader Adnan is entering his 61st day as a hunger striker in an Israeli prison, being held under an administrative detention order without trial, charges, or any indication of the evidence against him.

From the outset of his brutal arrest in the middle of the night – in the presence of his wife and young daughters – he has been subject to the sort of inhumane and degrading treatment that is totally unlawful and morally inexcusable.  Its only justification is to intimidate, if not terrify, Palestinians who have lived for 45 years under the yoke of an oppressive occupation.

This occupation continuously whittles away at Palestinians’ rights under international humanitarian law – especially their right to self-determination, which is encroached upon every time a new housing unit is added to the colonising settlements that dot the hilltops surrounding Jerusalem and the West Bank.

The case of Khader Adnan is a revealing microcosm of the unbearable cruelty of prolonged occupation.  It draws a contrast in the West between the dignity of an Israeli prisoner and the steadfast refusal to heed the abuse of thousands of Palestinians languishing in Israeli jails through court sentence or administrative order.

Mr Adnan’s father poignantly highlighted this contrast a few days ago by referring to Gilad Shalit, the Israeli soldier held by Hamas in captivity for several years and recently released in good health: “Where are the mother and father of Gilad Shalit?  Do they not feel for me in this humanitarian case? Where are they?”

He went further in drawing this comparison: “My son was arrested from his house, from among his wife and children, was taken prisoner.  He was not carrying any weapon.  Whereas Shalit was fighting against the people of Gaza, and destroying their homes, and firing upon, and Shalit was released.”

It is true that foreign authority figures, from the UN Secretary General on down, showed their empathy for the agony experienced by Israelis concerned for the well-being of Shalit, but these same personalities are notably silent in the much more compelling ordeal being experienced before our eyes in the form of Mr Adnan’s captivity, seemingly unto death.  It should not be surprising that surviving family members of IRA hunger strikers should step forward expressing solidarity with Mr Adnan and compare the Irish experience of resistance to that of the Palestinians.

And who is Khader Adnan? We do not know very much about him except that he is a member of the Islamic Jihad Party.  There are no accusations against him that implicate him in violence against civilians.  His fellow prisoner from an earlier period of confinement in Ashkelon Prison, Abu Maria, recalls his normalcy and humanity while sharing a cell, emphasising his interest in informing other Palestinians: “Prison was like a university in those times and he was one of the professors.”  Commenting on his hunger strike that has brought him extreme pain, Abu Maria says he is convinced that Khader Adnan wants to live, but will not live in humiliation: “He is showing his commitment and resistance in the only way he can right now, with his body.”

Adameer, the respected Palestinian NGO concerned with prisoners, “holds Israel accountable for the life of Khader Adnan, whose health has entered an alarmingly critical stage that will now have irreversible consequences and could lead to his fatal collapse at any moment”.  Physicians who have observed his current condition conclude that, at most, he could live a few more days, saying that such a hunger strike cannot be sustained beyond 70 days in any event.  Any attempt at forced feeding to keep a prisoner from dying is widely viewed as an additional abuse, a form of torture.

Finally, the reliance by Israel on administrative detention in cases of this sort is totally unacceptable from the perspective of the Geneva Convention, especially so when no disclosure of the exceptional circumstances that might warrant for reasons of imminent security the use of such an extra-legal form of imprisonment.  There are currently at least 300 Palestinians being held in a manner similar to that of Mr Adnan, and so it is no wonder that sympathy hunger strikes among Palestinians are underway as expressions of solidarity.

Have we not reached a stage in our appreciation of human rights that we should outlaw such state barbarism?  Let us hope that the awful experience of Khader Adnan does not end with his death, and let us hope further that it sparks a worldwide protest against both administrative detention and prisoner abuse.  The Palestinian people have suffered more than enough already.”