Under intense international pressure, the Israeli military has reversed its earlier decision to extend Khader Adnan’s term of administrative detention beyond the four-months originally imposed by a military court in January.  For his part, Adnan agreed to end his protest hunger strike in its 66th day.

He has not been charged with any crime.  Under administrative detention, Israeli military judges have the power to imprison people for up to six months at a time, and they can renew the detention order repeatedly.  This barbaric practice, a British invention, was the target of Khader Adnan’s hunger strike. 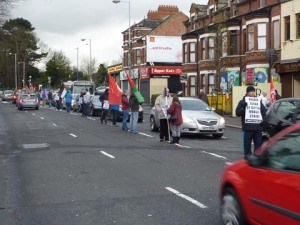 Adnan is to be released from prison on April 17, when the original detention order expires – “if no major new evidence is brought against him.”   So says the army.  Since any alleged evidence is always kept secret, even from defendants and their lawyers, the ‘if’ remains a huge, dangerous loophole for the Israeli occupation regime to exploit.

The agreement was signed less than an hour before the Israeli High Court was due to hear the case.  The New York Times noted, “It forestalled an emergency hearing at the High Court of Justice that could have set off a broader review of Israeli military courts’ practice of administrative detention, which has been used against thousands of Palestinians over time.”  Even though the High Court can nearly always be counted on to back the army, the Israeli regime may have wished to avoid the further international scrutiny that the case would likely have drawn.

International attention has been a key factor in this story.  Most of it was generated through grassroots networks, via the internet and word-of-mouth; the mainstream media picked up the story only within the last couple of weeks.

After 66 days without food, Adnan’s health is seriously impaired.  Physicians for Human Rights – Israel commented recently that he could not survive beyond the next few days.  It is unclear to what degree he may suffer permanent damage.  But he made his point.

This story is larger than Khader Adnan, and he knew it.  A mathematician who makes his living as a baker, according to people close to him he wasn’t interested in drawing attention to himself, but rather to the grotesque injustice of the Israeli occupation.  Though his hunger strike is unlikely to affect policy, it did succeed in throwing an unprecedented international spotlight on administrative detention.  More than 300 Palestinians are currently imprisoned under it, along with thousands more held by other repressive means.

Bassem Tamimi’s story is also larger than himself.  Imprisoned 11 times (so far) by the army, held three years in administrative detention and tortured, he has never been convicted of any crime.  This week Tamimi told an Israeli judge why he continues to lead protests in his village, Nabi Saleh: “I do not know and do not care if they are permitted by your law, as it was enacted by an authority I do not recognize.  International law gives us the right to peaceful protest, to demonstrate our refusal of the policies that hurt us, our daily life and the future of our children.”

These stories manifest a long, intense struggle between elite power and people of conscience.  From its inception the Zionist movement has cultivated elite power very adeptly, first by aligning itself with the British empire which ensured the creation of Israel, then with the American empire, and its junior partners like Canada, which maintain it.

Recently the government of Canada, where I live, announced that it would expand the Canada-Israel Free Trade Agreement.  Since CIFTA was enacted in 1997, trade between Canada and Israel has more than doubled.  By deliberately ignoring illegal settlement activity and production of goods in Israeli industrial zones within the occupied West Bank, CIFTA effectively legitimizes Israeli territorial control over all of Palestine.  This is elite power at work.

On the other hand, there are the Khader Adnans and Bassem Taminis.  Our Way to Fight features a gallery of brave, creative people who resist tyranny and injustice in myriad ways, as do countless others whose stories we may never hear.

And then there is you, me – us.  Here are two upcoming initiatives, ways to stand and walk with Khader Adnan, Bassem Tamimi, and others:

1)  Global March to Jerusalem (March 30).  “March 30 marks Palestine Land Day, a crucial day in Palestinian national memory.  This year our aim is to mark it as an international event to demonstrate solidarity with Palestinians and to protect Jerusalem.  This will be achieved by organizing a Global March to Jerusalem or the nearest point to it.  The march will unite the efforts of Palestinians, Arabs, Muslims, Christians, Jews, and all citizens of conscience in the world to put an end to Israel’s disregard for international law through the continuing occupation of Jerusalem and the rest of Palestinian land….”

2)  Welcome to Palestine Campaign (April 15-21).  “There is no way into Palestine other than through Israeli control points. Israel has turned Palestine into a giant prison, but prisoners have a right to receive visitors.   Welcome to Palestine 2012 will again challenge Israel’s policy of isolating the West Bank while the settler paramilitaries and army commit brutal crimes against a virtually defenceless Palestinian civilian population.  The participants in Welcome to Palestine 2012 will ask to be allowed to pass through Tel Aviv airport without hindrance and to proceed to the West Bank to take part in a project there for children to benefit from the right to education…”