A definition of insanity: If something clearly doesn’t work, do it again.  And again… 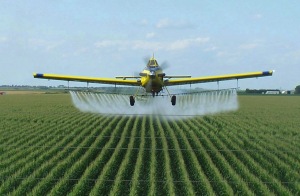 The corporate leviathans that brought us GM crops promised no pollen spread. Fact: Any place these invasive crops are planted they spread pollen as far as wind and bugs can carry it, making it impossible to grow non-genetically manipulated crops for miles around.

The corporate solution to the new problem: Throw more chemicals at it. No surprise, chemicals induce dependency and generate enormous profits. The pushers are pushing hard – not that it takes much pressure – to get US government approval to sell the highly toxic 2,4-D herbicide/defoliant, infamous as a weapon of mass destruction in the US war on Viet Nam.

At the same time, the industry plans to release GM crops.2, corn and soybeans genetically manipulated to tolerate repeated dousing with multiple herbicides, including 2,4-D. Details here, in Wired: http://www.wired.com/2014/09/new-gm-crops/.

For a saner path, stop in for a visit with Ann Clark, plant physiologist and post-oil farmer, in Bold Scientists, chapter 2, Digging thistles. Read an excerpt here.