Update on that Wednesday protest in Belleville: 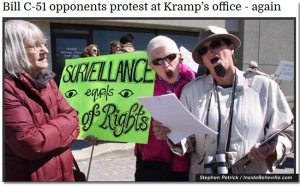 Conservative MP’s office calls police on C-51 protesters for singing and being “noisy”.

Best comment, from Gary Magwood: “Daryl’s office called the police because we were ‘disruptive’, we were ‘noisy,’ and – here’s the best part – we were distracting the office staff from attending to constituents’ concerns. Now don’t you love that for double-speak? Aren’t we constituents?”

Which is exactly why so many Canadians regard Bill C-51 and its authoritarian authors as a threat to national security.

After participating in the Belleville protest, I reported having mixed feelings, even doubts, about its value.

Now I have none.