This is not a joke.  It is not science fiction.  It may be a beauty tip.

Turns out one of the CIA’s countless tentacles, its venture capital arm In-Q-Tel, has a stake in a US company producing cosmetic products that claim to erase blemishes and soften skin.

Why?  It’s not enough for Big Brother to watch and listen to everything we do, say, write, or think.  He also wants to know what we exfoliate.

All in a day’s work for the Central Intelligence Agency, which never rests in its mission of protecting The Free World from democracy.  As the heading on their website proclaims: The Work of a Nation.  The Center of Intelligence.

In the ever-deepening shadow of the national surveillance state, a bright gem of a story.

Science writer Simon Oxenham reveals why and how this brilliant young neurotechnology researcher in Kazakhstan did it. Details here, on Big Think.

It’s an inspiring account of knowledge gathered, privatized – imprisoned, really, to exploit for profit – and now, thanks to Alexandra Elbakyan, set free.

A fragment: “Only days after the [New York District] court injunction blocked Sci-Hub’s old domain, Sci-Hub was back online at a new domain accessible worldwide. Since then, the website has been upgraded from a barebones site that existed entirely in Russian to a polished English version proudly boasting a library of 48 million [research] papers, complete with a manifesto in opposition to copyright law. The bird is out of its cage.”

In part 2, here, Simon Oxenham pays tribute to pioneering internet creator and activist Aaron Swartz, who was ultimately hounded to death in 2013 by the US government.

Fortunately, at least for now, Alexandra Elbakyan and Sci-Hub remain beyond its imperial reach.

To encounter other scientists who defy the status quo, check out Bold Scientists: dispatches from the battle for honest science. Read excerpts here.

Engineered illusions have fueled the Harper regime’s dangerous grip on power.  Here’s good insight into how some of these illusions are collapsing along with international crude oil prices.

The tar sands corporations and the Harper regime are hard to tell apart.  Both believe that plunder is their right, even their duty.  Both are obsessed with greed and power, their religion.  Both do harm on an almost numbing scale, and call it “good management.” Both depend on each other in myriad ways for their survival.  Both hate democracy.

In addition to the tar sands nightmare, the Harper regime has presided over a full spectrum of unnatural disasters, including: systematic assaults on environmental protections and honest science, starvation of the national health care system, massive surveillance, escalating military budgets and eager participation in criminal wars wherever US authorities choose to attack.

In a sane society, all of these would be considered major crimes.  In Canada, the current regime hopes they will be grounds for their re-election.

I have no illusions about elections as a solution to the enormous problems we face.  I know that once in power, none of the parties on offer will go nearly as far as I think they should to address these vital issues honestly, fairly, and adequately.  But:

By now we know from bitter experience that if the Harper regime can fool enough Canadians into voting for it in October, the disasters will only deepen and multiply.

Question is: How low can we go?

Update on that Wednesday protest in Belleville:

Conservative MP’s office calls police on C-51 protesters for singing and being “noisy”.

Best comment, from Gary Magwood: “Daryl’s office called the police because we were ‘disruptive’, we were ‘noisy,’ and – here’s the best part – we were distracting the office staff from attending to constituents’ concerns. Now don’t you love that for double-speak? Aren’t we constituents?”

Which is exactly why so many Canadians regard Bill C-51 and its authoritarian authors as a threat to national security.

After participating in the Belleville protest, I reported having mixed feelings, even doubts, about its value.

Now I have none.

Against what: A new federal bill, C-51, which smooths the road toward a police state in Canada. The bill is currently winding its way through Parliament. 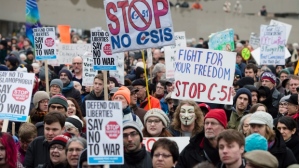 After protests across the country and from many sources, the ruling Conservative regime has made a show of amending the bill.  Like paint slapped on a rotting house, the proposed changes will have minimal impact on the bill’s nightmarish potential.

Where: At the Belleville constituency office of Daryl Kramp, the local Member of Parliament. He’s a Conservative, ie a Northern Republican, and he’s chairing the committee currently sliding the bill through Parliament. Kramp was absent from the Belleville office today, being rather busy in Ottawa.

Who: 40 – 50 people from the area who are alarmed enough by what they’ve learned about this bill to protest it in public. The rally was called on short notice, in response to the proposed ‘amendments.’

After a few decades protesting a panorama of injustices, bigotry, stupidity, greed, crimes against the earth, abuse of power, state terror and such, at today’s protest I experienced a familiar mix of reactions:

This mix, and the gradual shedding of illusions over years, eventually led me to stop going to protests like this one.  But then I was grateful that some people took the trouble to organize it, and that other people bothered to show up on a bright spring afternoon in the middle of a week. But then I know well enough that the real decisions are made far from here, in cabinet rooms and board rooms, by sociopaths in suits, over lunch.

Even so, how can I justify staying home in my comfortable, safe little cave, pretending that I accomplish anything that matters simply by writing?  And who knows what effect each of these acts of resistance might have?  The arrogant managers would have us believe they are oblivious to our protests, and nothing we do will make any difference.  But when they lie about practically everything else, why not about this, too?  Wouldn’t things be that much worse if we left them to their own devices?

What do you think?