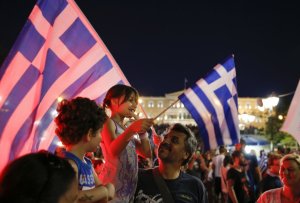 This is a first, a historic moment. An act of defiance and great courage. A sharp rupture with business as usual.

I’m sure that in voting No, people rejected many different but ultimately connected things: The threats and unbounded arrogance of international bankers and Euro-bosses, primarily the German Chancellor; the lies and corrosive contempt of the mainstream media; the corrupt, discredited old ruling parties of Greece; an indirect but obvious attempted coup against the government that Greek voters had just elected in January; a weary apathy born of repeated blows and letdowns; fear of the unknown, and more.

But most directly, a strong majority of Greek voters rejected a power structure they know very well by now through bitter lived experience, a system that makes a decent, sustainable life impossible for the many in order to indulge the insatiable greed of the few.

For people like me in other countries where No’s that challenge this power structure are routinely ignored, mocked or punished, this is a rare, thrilling moment, to be savoured.

To me, the Greek Όχι echoes another famous No!  During the Spanish civil war, people defending democracy from fascism boldly declared: No pasaran. They shall not pass. Sadly, the fascists did pass, and they are still with us. Even so, the original call has lost none of its abiding power: No pasaran!

No illusions here: The bankers and their faithful servants in government and media are still with us. They are mightily offended by the defiance of the Greeks. They fear that this ringing No! will inspire people suffering under the bankers’ heel in other places: Spain, Portugal, Italy, Ireland, Ukraine and beyond.

Syriza and the people of Greece face an enormously difficult path, a new path with no map. They will be bullied, bribed and beguiled to bow down or sell out.

With humble thanks, I wish them the clarity and courage to find their own way to a more reasonable, more compassionate, more authentically democratic future.

Far too long, financial vampires in Europe and North America have had free access to the open veins of the Greek people. Little blood is left, but still the vampires want more. This is how they live, in castles called the IMF, the European Commission, the European Central Bank.  They call their brutal regime ‘austerity,’  but its true name is insatiable, murderous greed.

After years under this regime, and rising popular protests, in January of this year Greek voters elected the Syriza party to form a government. It’s still young, a coalition formed only in 2004.  Chief among its promises was to end the suffering and brutality of imposed ‘austerity.’

The vampires hate the new government. They set about immediately to discredit, paralyze and ultimately to smash it.  An example must be made, subjects must be reminded of their place.

In power six months now, the Greek government has tied itself in knots trying to meet the insatiable demands of the vampires, while still keeping its promises to the people who elected it. Finally this past week it could no longer yield any further without cravenly betraying them.  Instead it asked the people of Greece to decide for themselves how to proceed.

Tomorrow, Sunday July 5, Greeks face a stark choice between two extremely painful paths, both imposed from outside. One path is to accept more of the same from the vampires, the other is to refuse them, and face the vicious retaliations that will surely result.  It’s a horrible decision that no one should ever have to make.  It’s a forced decision that people in other parts of the world also face, and very likely many more of us will have to face in the future.

This won’t be the first time Greeks have been forced to fight for their freedom, even their survival, against enormous odds. In April 1967, backed as usual by the CIA, Greek army officers launched a coup against the elected government. The military junta immediately abolished civil rights, dissolved political parties and exiled, imprisoned and tortured politicians and citizens who resisted, opposed, or even questioned them.

For most Greeks it was a nightmare, but the vampires thrived.

On February 21st, 1973, law students went on strike against the military dictatorship, barricading themselves inside the Law School of the University of Athens. They demanded the repeal of a law that imposed forcible military drafting on “subversive youths”, a fate already suffered by 88 of their peers. The police were ordered to attack.

By chance, I happened to be there.

Circling the Mediterranean on a quest of sorts, that afternoon I was heading for the Acropolis.  On a downtown building I noticed young people at the edge of the roof, holding up a banner in Greek. On the streets below, swarms of buses gathered, their flanks and windows painted dull grey. Men in uniform spilled out, clubs and guns on their belts. Streets emptied, shop doors slammed shut. Soon young people started disappearing from the roof. After awhile they emerged from the main entrance, staggering, choking and gagging – from tear gas, I assumed. They were forced through a gauntlet of police, who beat them with clubs. I saw and heard the impact on heads and backs, saw people hurled like sacks of grain into buses, caught glimpses of more beatings inside. On streets I watched ordinary looking men suddenly pull out small clubs from inside their jackets, beat young people, apparently at random, then run away. Here and there a shop door opened and hands pulled in a fleeing refugee. Behind other doors, people shook their heads, Go away!

That first uprising at the Law School is often cited as prelude to a much larger one in November 1973 at the Athens Polytechnic. Though it too was put down with even greater brutality, it sparked thousands of workers and youth to join protests across Greece.

In July 1974, the military dictatorship collapsed. Four months later, national elections were held, the first in seven years, won by the conservative New Democracy party.  Fatefully, one of its first priorities was to seek membership in the European Community, formed only a few years before.

The same forces I witnessed that day in Athens are still at work today. Now they wear suits. The uniforms and thugs stay in the background, to be called up as needed. Now the preferred weapons of mass destruction are international finance and trade agreements, negotiated over our heads and behind our backs. Like other dictators the finance vampires hide behind a veil of fake legality, to kill and destroy with impunity, smug in their ruthless power.

So long as these vampires continue to rule, by deception and force, people everywhere will continue to face the kind of torturous dilemma that Greeks face tomorrow, and worse.

For the people of Greece I wish the clarity of vision to see through the propaganda and threats that assail them, and the courage to refuse the vampires.